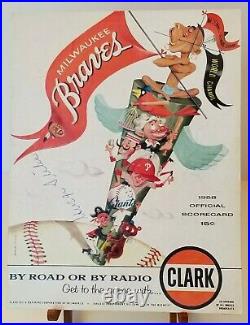 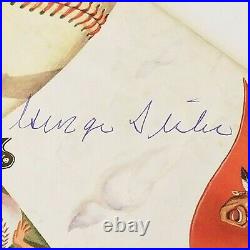 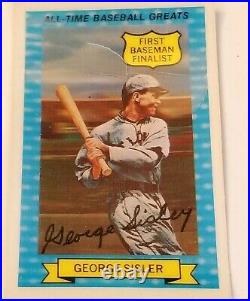 IN MEDIUM BLUE INK, BRIGHT, LARGE AND VERY LEGIBLE HALL OF FAME GREAT SIGNED MY AUGUST 7, 1958 MILWAUKEE BRAVES SCORECARD. THIS WAS A LADIES DAY GAME AND MY BASEBALL LOVING GRANDMOTHER TOOK ME AS AN ELEVEN YEAR OLD TO THIS GAME. I OFTEN WAITED OUTSIDE THE VISITORS LOCKER ROOM TO GRAB SIGNATURES AS THEY EXITED TO WALK ABOUT 75 YARDS TO THE MILWAUKEE COUNTY TEAM BUS. AT THE TIME OF THIS PROGRAM, APPARENTLY SISLER WAS TRAVELING WITH THE TEAM AS A ROVING BATTING COACH FOR THE PITTSBURGH PIRATES. IT IS SAID THAT SISLER WAS PARTICULARLY INSTRUCTIVE TO ROBERTO CLEMENTE, HAVING HIM USE A HEAVIER BAT AS SISLER DID (SISLER REPORTEDLY USED A 42 OUNCER). In 1942, Branch Rickey hired the 49-year-old Sisler to scout for the Brooklyn Dodgers. Sisler served in this capacity throughout the decade, but his greatest contribution may have come in preparing. To break baseballs color barrier. He scouted Robinson prior to his signing with the Dodgers, and helped the future Hall of Famer make the transition to first base during his first year in the majors. Sisler moved to Brooklyn to assume an expanded role with the Dodgers in 1947, and in addition to scouting and player development helped tutor several of the players that would serve as the foundation of the outstanding Dodgers teams of the 1950s. When Rickey moved to the Pirates before the 1951 season, Sisler again went with him. There he helped bring Bill Mazeroski into the fold, and also worked with. Teaching him to keep his head still during his swing. Sisler remained with the Pirates after Rickey left, but after serious abdominal surgery in 1957 he and Kathleen moved back to St. Despite the move, Sisler remained with the Pirates as a roving hitting coach, and instructed such players as.

KELLOGS 3-D CARD OF SISLER. DONT GET TOO EXCITED, IT HAS A LEFT TO RIGHT CRACK AT THE TOP.

Hello and thanks for taking a peek at this item. My nickname is Kilted Ken and since my first breath the games of baseball and football, in particular, but all other sports as well, have been woven into the fabric of my life. For that and because of my passion for sporting activity, I have been featured in the likes of ESPN the Magazine, Athlon Sports, BIG Ten Treasure Hunter, Travel Channel, and several other media. (Check me out on Google, Kilted Ken, if you wish) I say this not to boast but lay some credence for the many, many baseball and football related items I will be posting over the next several months.

I have been collecting sports relics for decades and now, ta damy wife has convinced me to downsize! You may benefit from my tragedy! The item "HALL OF FAMER GEORGE SISLER AUTOGRAPH1958 MILWAUKEE BRAVES SCORECARD, ASST MGR" is in sale since Friday, April 23, 2021. This item is in the category "Sports Mem, Cards & Fan Shop\Vintage Sports Memorabilia\Bobble Heads".